http://www.timetotellmum.com – Unhappy about Australia’s proposed internet filter? The best thing you can do to fight it is help your mum understand that it won’t work.

and the Australian Censored version.

The details below are copied from the Youtube video description, lots of good details in this:

<Copypasta>
Video Comparison Between The Uncut version of Left4Dead2 and the Australian “Low Violence” version.

According to the classification board report, the modified version removes considerable amounts of gore from gameplay.
The board notes that the game no longer contains depictions of decapitation, dismemberment, wound detail or piles of dead bodies lying about the environment, the report said.

No wound detail is shown and the implicitly dead bodies and blood splatter disappear as they touch the ground.

Infected don’t actually Catch Fire in cut version (Except the Tank) however they still die in the flames.
NO Blood splatters on the screen
NO RIOT COP uncommon common in AUS release (violence against authority figures)
(and if you play with a person who has the cut version even if you dont, the riot cop will not spawn)
Pipebomb Explosion is Similar however the bodies ragdoll off and vanish in midair with out gibbing almost instantly

For those not in the know, the reason this game had 2 be modified to be released in Australia is because we don’t have a R18+ rating for games here in Australia. To have one introduced, all the states have to agree that they want one, all states have said yes to this, except SA (Michael Atkinson). So it is one man stopping the rest of us getting? an R18+ rating, So seeing as MA15+ is the highest we have got, the OFLC have no choice and the game must be modified to fit into that category if it is to be released here, otherwise its the ban hammer and the game gets Refused Classification(RC). So its not Valves Fault, Its not the OFLC’s fault its not the governments fault… its Michael Atkinson‘s Fault.

His Excuse is that he doesn’t think we need one and that if we don’t have one the? children wont get introduced into Violent Video Game, He thinks he is protecting the children, however when you think about it he is doing the opposite, by refusing to have a R18+ rating he is making it so that games that would have otherwise been rated as R18+ are being modified to? fit into the MA15+ rating therefore introducing those games to an even younger generation than would have been whilst at the same time punishing the rest of us by censoring the game and making a choice that should be ours for us.
We Should be allowed to play this as we want, in the uncensored version you have the option to disable gore if wanted.

There is a small fix for those that are fed this censored garbage, those that want to give it a try details are in the link below, HOWEVER take note of the following before you do so.

NOTE: You can only play with other people using the same ID (510). (you can only play with others who have done this fix also, limiting your possible teammates)
NOTE: this fix may not be permanent. This seems like it’ll only be temporary.
NOTE: May have an affect on your Gameplay Statistics and Achievements as this makes steam think you are playing a different game. (May Not save them)
NOTE: You’ll have to launch the game through the left4dead2.exe instead of through Steam. Steam will disconnect you immediately

More details on the GetUp! campaign see the link below:

ACMA’s (Australian Communications and Media Authority) list of banned web pages has been leak onto wikileaks.org. The list which is meant to contain links to supposed banned content such as child pornography, also lists large online poker sites, YouTube pages and even some Wikipedia links.

But what the list also contains is the website of a Queensland dentist (http://dentaldistinction.com.au/) which appears to be on their for no good reason. Someone must really hate the dentist, or the government is trying to protect kids from the dentist. 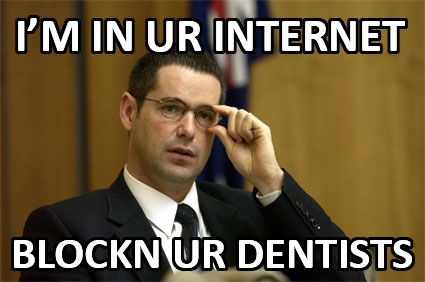 ACMA has issued Whirlpool’s web host Bulletproof Networks with a notice to remove a link to this anti-abortion web page, blacklisted by the regulator in January. At risk of their host being hit with $11,000 fines per day….
[More @ Somebody Think Of The Children]

I find this both shocking an appalling. While I may not necessarily agree with the content, it is an opinion and that is no reason for it to be silenced. This in no way to protect children Conroy, the children are already dead at the site in question, and adults should be able to form their own option of the content in question not have you tell them what to think. This is the kind of nonsense that should have been stamped out long ago.

First I must say Senator Stephen Conroy shame on you, you need to learn about bullying, and the consequences of it. We have seen in the last few years an active push to stop bullying in schools (http://www.bullyingnoway.com.au/), but that seams to have slipped past the Minister for Broadband, Communications and the Digital Economy.

So what am I harping on about, well there has been some debate on implementing a national internet filter in Australia. Well ok maybe that’s not really true, it’s more an argument about what to block, as it appears the decision has already been made and now it’s up to the special interest groups to get as much stuff blocked as possible.

Here is the part that really pisses me off, Conroy tried to shut this information down. When Mark Newton from Internode raised these concerns and criticisms, minister Conroys department (Belinda Dennett) fired off a letter to the Internet Industry Association (IIA) board member Carolyn Dalton in an attempt to pressure Newton into reining in his dissent.

“In your capacity as a board member of the IIA I would like to express my serious concern that a IIA member would be sending out this sort of message. I have also advised [IIA chief executive] Peter Coroneos of my disappointment in this sort of irresponsible behaviour”

The worst part of this is that a phone call demanding that the message be passed on to senior Internode management was made. What?! Sound like they were trying to get Mark fired to me.

Any way I’ll leave it for you to decide, below you will find links to coverage on it but most importantly an interview with Mark conducted by NetQOS’ s Performance daily.

Oh yes I’ve also set up a redirect on my site that grabs people coming from gov.au internet addresses and gives them a wonderful message that you are all free to view.

The code in the htaccess file is as follows:

Yes, not perfect but the aim is to annoy, anyway it’s inspired by the “the gov.au blockade” back in 1999.

YouTube, or maybe they should be called NoobTube, and no that’s not a BF2 reference to people using grenade launchers at point blank. Any way back on the point, YouTube has once again done something that makes them look foolish after receiving 4000 DMCA take down notices from an organisation that does not exist. That’s right they have started dropping peoples accounts based on false claims from a group that does not exist. The false group in question is American Rights Counsel LLC, a group that basically doesn’t exist. The only results you will find in Google will be for people complaining about their accounts being suspended. For a group that sounds like a rights group, they sure know how to suppress peoples rights. Buy the way Filing a false DMCA claim is illegal.

Welcome to ‘The Suck’ if you’re a YouTube user.

Anyway here is a list of some forum threads and other articles on this current debacle:

This video kind of demonstrates my point as to why Grand Theft Auto 4 (GTA 4) will probably either be modified for release in Australia, or banned outright.

Before watching the video I thought it best to describe what you will see in the video.

First of all you will see the character receiving a hand job from the ‘lady of the night’ he has previously picked up, the hand job costs him $20. After conducting her business transaction the girl then gets out of the car and the player proceeds on to his next sexual conquest.

Once finding the next girl the player dives to another place that quiet. This time the fee in $70, but this time it’s plain and simple sex, , ok maybe not so simple as the position in the driver seat doesn’t look all that comfortable for either party. After finishing off the girl gets out of the car, but this time so does the player. As the girl is walking away the player pulls a gun she begins to run…. bang, 9mm round to the head, that’s one dead hooker. Oh one more thing don’t forget to pick up her cash that dropped off her when she got hit in the head, it’s amazing how people drop there money and you don’t’ have fish through their cloths when you shoot them in the head.

Having now seen the video the usual people are going to start to cry, that’s not suitable for kids why would they make a game like that. The point here is that GTA 4 isn’t designed for kids, if your a parent and you buy this for your kids your irresponsible and should know better.

GTA 4 is designed for older teenagers and adults, not to mention it’s meant to be a story about the life of an immigrant moving to Liberty City he’s kind of depressed and lonely being in a new place and country, so maybe he wants to have sex occasionally and is willing to pay for it. Reality is however as the player you don’t have to interact with the prostitutes it’s entirely optional. In fact I would be more concerned about the kid that comes up with the idea to kill the hooker after having sex with her, then any dangers the game may pose. Seriously if your kid was playing this and decided it was a good idea to kill the hooker after paying for sex, then your kid needs serious help now, as they are already one fucked up individual and they didn’t need this game to make them that way.